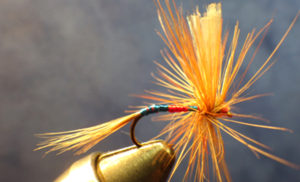 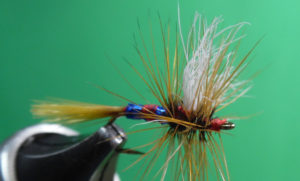 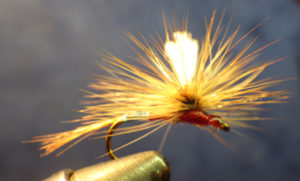 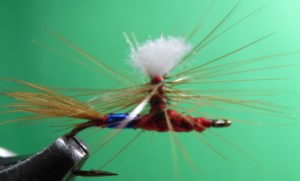 Larry Wegmann sent me these two fly to add to our web site.  The information that follows is what he shared with me.  I have included the flies and steps that I used to tie this fly and will have to spend more time tying them even to get close to what Larry’s look like

Larry Wegmann said, “The Patriot dry fly was developed by Charles Meck.  It is a great summer attractor.  On his website he gives this story about the Patriot.

“Back in 1985 I conducted experiments almost the entire summer with the Patriot and 19 other dry fly patterns. I compared its effectiveness against patterns like the Light Cahill, Royal Coachman, Adams and other top patterns. Over an entire season I cast each of the 20 patterns 1000 times on the same section of a nearby river. I made certain that none of the casts were made over rising trout. If I saw a trout rising I purposely passed by that section. I carried a counter with me so I had a fairly accurate count of the number of times a dry fly drifted and the number of strikes. In those tests the Patriot out-fished all other patterns by a wide margin. “

As mentioned this is a great summer pattern.  I first started using this fly about the time the movie “A River Runs Through It” was in vogue.  One scene in the movie shows a shadow cast with a dry fly.  The caster brings the fly close to the water surface 4-5 times and then drops the fly onto the water.  I found it extremely effective if you shadow cast through dappled sunlight.  I have had trout take it a foot above the water.  Another raced eight feet to take it away from another trout’s feeding lane.  The fights are extreme and test your tippet.  This fly is the definition of an attractor dry fly.  I have had success in all the parks and Mill Creek.  Blue Gill and their cousins can’t resist the temptation.

I mentioned this fly to a group of soldiers in Project Healing Waters from Fort Wood in 2007.  They grabbed on to this fly as their own.  Soon after it became the trademark fly for the PHW.” 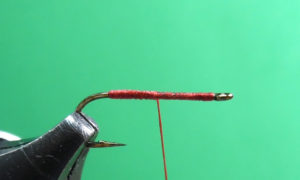 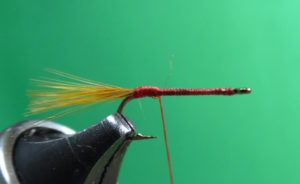 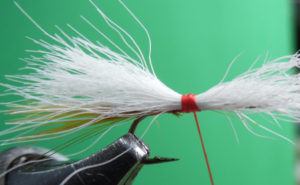 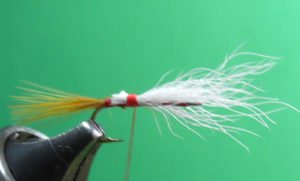 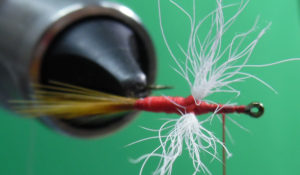 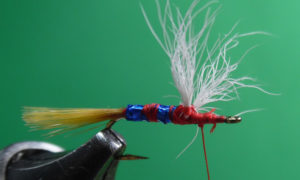 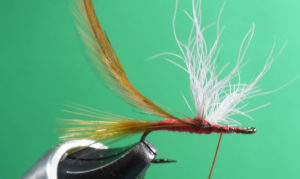 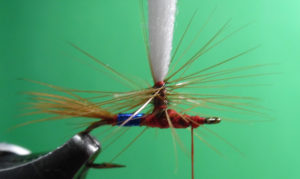 The last two pictures are the parachute patriot.