The Big Ugly (without or with parachute) 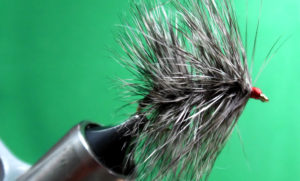 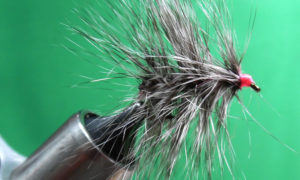 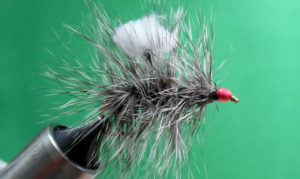 I first was introduced to the Big Ugly by our drift boar guide named Darrell Lundberg for River Run Outfitters.  He tied it on my line as a strike indicator.  He said that on occasions a trout will strike at the indicator.  If they do it with the Big Ugly strike indicator, you may catch a fish.  This pattern was created by Ken Chick of Springfield,MO.

Since that time, I have had a lot of fly fishermen tell me that on many occasions, a trout will strike at their strike indicator.  When we got back to River Run Outfitter’s fly shop, Darrell showed me how to tie the Big Ugly.  I forgot all about it until at The MTFA Branson meeting, Mike Marriott was tying them. (The better looking Big Ugly above without a parachute is Mike’s.)  With a foam body and a lot of Grizzly Hackles, it makes a great strike indicator.  I am getting old and for the last two months have been adding parachutes to my dry flies.  The white egg foam parachute stands out on the water.  I have added the parachute steps but if you don’t want to tie on a parachute just eliminate those steps.  When tying in the Grizzle hackle, tie in two hackle feather, tying them in the rear and palmer them together clockwise to the middle.  The take two more grizzle hackles, tying them in the middle and palmer them together counter clockwise to the eye of the hook.  I sometimes will add a fifth grizzle hackle if I am short at the eye.  Mike would burn off any hackle fibers that were covering the eye of the hook.  The first time I tried it, the front part of my fly’s hackle disappeared, so that is why I am showing a hackle shield to be used before burning the extras hackle with a bic lighter. 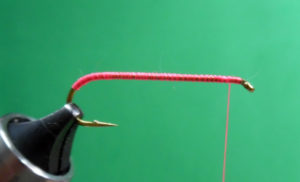 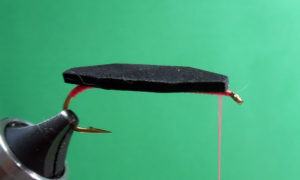 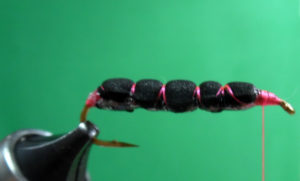 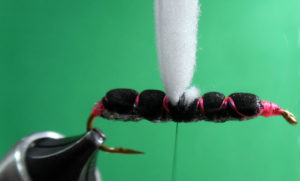 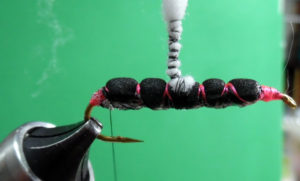 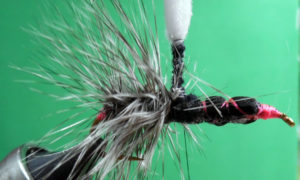 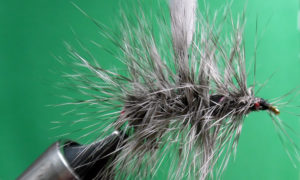 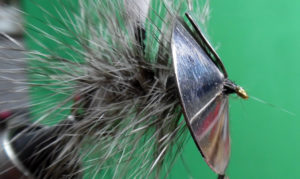