You can get by with three knots. Although, there are plenty of functional knots used in fly fishing, we concentrate on three points of connection: 1) the fly line to the leader, 2) leader section to leader section to produce a progressive leader reduction from butt to tippet (also to add tippet), and 3) the tippet to the fly.

1) the fly line to the leader:  The Perfection loop is used to create a loop in the end of a line. You can combine two loops to attach the line to the leader. By using a loop-to-loop knot, you can change leaders quickly and easily. OK, if you realized that a loop-to-loop connection is not really a knot, you’re catching on. Which loop goes into the other loop? The loop closer to the fly line goes into the loop closer to the fly. It makes a difference. If you do it wrong, you’ll know it. Don’t panic, just take it apart and do it the opposite way. 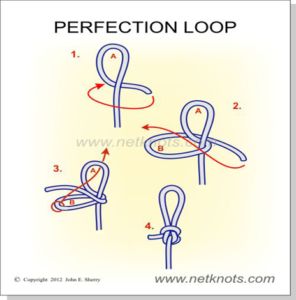 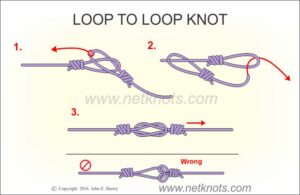 However, not all fly lines have a loop in the end for the loop-to-loop connection to the leader. You could use the Nail knot to attach a leader to the fly line instead, but it has the disadvantage that you cannot change leaders quickly.  By tying a short piece of a strong leader to the line with a Nail knot and then tying a perfection loop to the end of that short piece, you can attach your leader using a loop-to-loop connection. 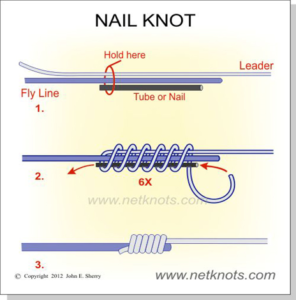 2) leader section to leader section to produce a progressive leader reduction from butt to tippet (or to add tippet):  A Blood knot is great for tying two lines together.  You can use this knot to create your own tapered leader using a series of blood knots tying smaller and smaller pieces of leader material together and then to the tippet. Since your tippet will get shorter each time you change flies, this knot will let you add another piece of tippet to the first piece. This knot works best when the two pieces of line are somewhat similar in size. In other words, don’t tie a large diameter line to a much smaller diameter line using this knot. 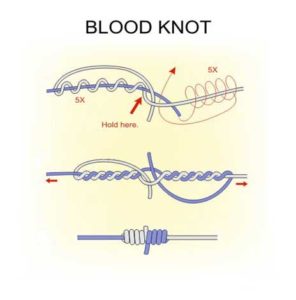 Alternative knots that will suit this purpose: The Surgeon’s knot can also be used to tie two lines together as in tying leader and tippet material together. It has the disadvantage of orienting the tag ends in a fashion that can catch your leader during a cast. That can result in an unfortunate tangle. The Blood knot’s tag ends orient perpendicular to the run of the line, reducing the chance for a tangled leader. 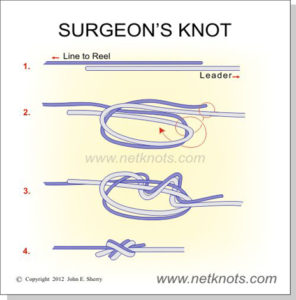 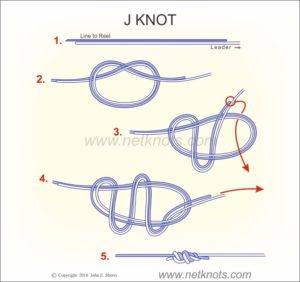 3) the tippet to the fly: Improved clinch knot is a good knot to attach the hook or fly to the tippet. 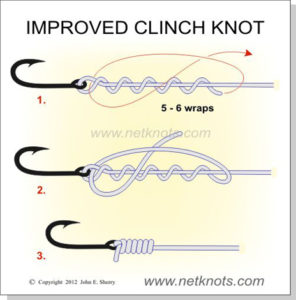 Alternative knots that will suit this purpose: The Davy knot is a quick, strong knot to attach flies to the tippet.  It seems to work best in small tippet and small flies. Tied properly, there is very little tag end waste.

The Pitzen knot is a strong knot and it makes a “pop” when tied correctly. Seat the wraps against the hook eye before pulling on the standing end of the tippet.

The George Harvey dry fly knot is strong, creates a straight line between the line and the fly, and places the wrappings on the shank just past the hook eye. Do not use this knot on a straight eye hook.

Sometimes, you may want the fly to have more “wiggle” to it by putting it on a loop. That’s more advanced. Look up the Surgeon’s end loop or the Non-slip loop knot. 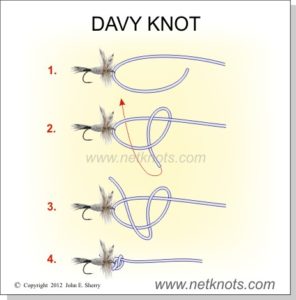 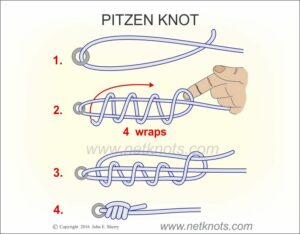 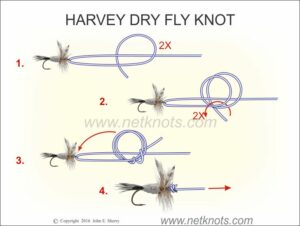 Click the following to visually put it all together: knots, where & when

Tips: wet your knot to lubricate the material before tightening it. Nylon sliding against nylon creates friction that can weaken the line.
Seat your knots well before using them.
Replace line that has been abraded.
A large difference in diameter between two lines tied together can be problematic.
Check your knots and their tag ends after vigorous use. Also, check for tangles, wind knots, and anything that can foul the line or leader.
You may hear the Blood knot called the Barrell knot. Same knot.
There are other knots that you simply won’t use often enough to worry about until you need them. For instance, tying the backing to the reel by using the Arbor knot.  Another knot, the Albright knot, would be used to tie the fly line to the backing. When you need to do this, look them up online, keep a demonstration like the ones above on your phone, or go to a fly shop. If you buy the backing and line at a fly shop, by all means, bring your reel along and ask them to set it all up. If you didn’t buy the material there, buy a few flies from them, tell them a few fish stories, and ask if they could teach you how to tie it. If they charge you for that service, it will be money well spent compared to having line failure during the fight of the best fish of your life.