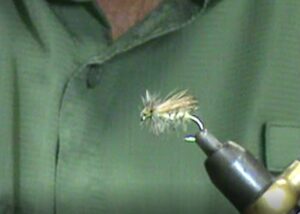 Lay thread base on hook shank to beginning of bend in hook.
Tie in tensile.
Tie in hackle by the base.
Tie in yarn, starting about 1/3 of the way up the shank to leave a reverse taper toward the hook bend.
Twist yarn clockwise to tighten it.
Wrap one turn of the yarn behind the hackle and the tensile.
Then palmer yarn forward with touching wraps behind the thread. The palmering will bring the thread forward with the yarn.
Stop behind the eye, leaving room for hair head. At least one eye diameter behind the eye. Secure to hook and cut tag end.
Palmer hackle forward 5 or 6 open wraps, secure to hook, leave tag end for later use.
Palmer flashabou forward in open counter-wraps, secure to hook behind hackle, and cut tag end.
Collect and cut 25-30 elk hairs, approximately ¼-1/2 pencil diameter and place them in stacker.
Stack by tapping bottom of stacker on surface, turn horizontally, and separate stacker pieces.
Remove stacked hairs by the tips, change hands to reveal tips, and measure against hook shank. Tips should be near bend of hook. The tie-in should be just forward of the hackle tag end.
THE TIE OFF: set the hairs on the side of the hook near you to allow the thread torque to pull the hairs to the top of the hook, make a loose wrap, then touching the first but moving toward the eye make another, slightly tighter wrap, repeat once, then a tight wrap. Butt end of hairs will start to flare, however, tip ends are still in between your fingers and are kept from flaring. Make a couple of firm wraps, then a couple more forward.
Bring the hackle forward to the hair tie off point and make touching wraps to form a collar. Tie off.
Cut the butt end of the hairs at approximately a 45 degree angle (parallel to down eye of hook) leaving 1/8 inch or less depending on fly size for a head.
Cut the remainder of the hackle tag off.
Whip finish.