Crystal Bugger (Wooly Bugger) has been used by John Bush with great success.

John said “the secret to this fly in my opinion is the chenille.  You can find it at Bass Pro and most of the local fly shops have started carrying it as well.  It says “Woolly Bugger Chenille” on the package and has a lot of sparkly flakes in it that really make it pop.  I’ve tried essentially the same pattern in a solid black, and this outperforms it hands down.” 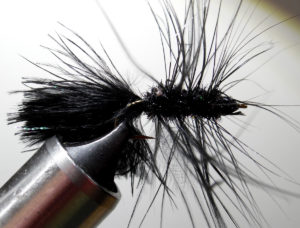 Like any woolly bugger, feel free to tie in multiple colors as desired.  Black has been the most successful for me, but I’ve also had good luck with Olive and have a few tied up in white, plus I’m planning on tying some up in purple as well.

Fish on a 2.6 ips sinking lead with erratic strips and it seems to drive the fish crazy.