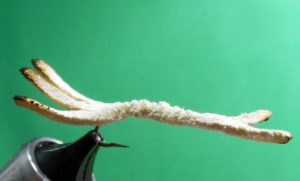 3 Tail Chamois worm.  In the afternoon at Bennett Springs, I watch a guy casting in the deep end buy the gut hole using a strike indicator.  On every other drift he caught a fish and no one else was.    I could see he was using a two fly set up but could not see what the fish were biting on.  Another fisherman walked up to him during one of his catches and asked him what he was using.  Could not hear but after a while the fisherman who asked came up to his truck that was right next to mine.  I asked him what he learned and he told me that the other fisherman was using a chamois worm.  He then showed me the one given to him.  I took a chamois work out of my fly box, cut both ends with my nail clipper and started fishing.  Yes, I also caught fish.   I just finished tying the chamois worm that was shown to me.  I tied it on a Tiemco 200R size 12. I added a little weight and cut my chamois in 3/16 strips.  I will call it a 3 tail chamois worm.  Start tying. 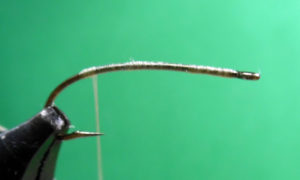 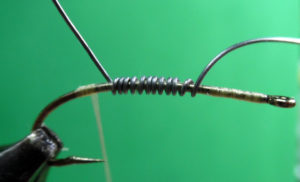 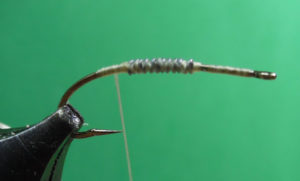 Put a thread base down.  Add some lead wire, I used .015.  Cover the wire with your thread, tapering a ramp at each end of the wire. 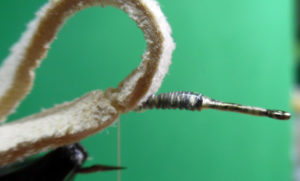 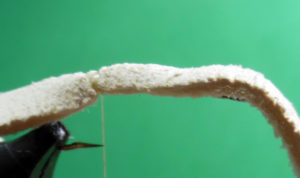 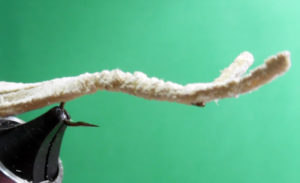 Tie on your 3/16 inch chamois strip and add some super glue.  Pull the strip on top and hold to glue has it secured.  Tie forward and whip finish.

Cut three tails with a razor and two antennas.  Burn ends with a lighter.