Four of us went on a camping/fishing trip Thursday, 4/13 through Saturday, 4/15 to the Northfork River in Arkansas.  Todd Fecho went down a day early and left a day early so he could take his kids to Easter celebrations.  Larry Olson, John Bush, and I (Bob Randall) went for the other dates.  Larry couldn’t sleep so he got up early and hit the road.  He got in a lot of fishing that day.  John and I were off to a much later start.  Larry cleaned up with 9 fish on Thursday, Todd caught 6, John caught 6, and I limped along with only 3.  Check out Larry’s nice brown.  Larry usually fishes nymphs with no strike indicator.  He likes to feel the bite. 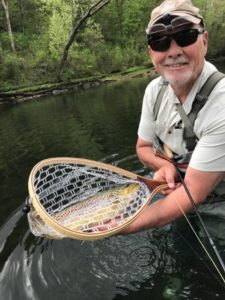 Let me note that Todd caught 6 or so on Wednesday before the rest of us arrived.  We camped at the Quarry Campground below the Norfork Dam.  Camping out was great fun.  Larry is a retired firefighter who did a lot of cooking in the firehouse for the rest of the crew.  He does great as the camp cook and has been elected to be Chief Cook and Bottle Washer for all future campouts.  Friday was a beautiful day.  Three of us went down stream to the Ackerman Access.  Todd stayed behind since this was his last day and he wasn’t sure how long he would be fishing before breaking camp.  The river was beautiful but not very productive.  Over about two hours of fishing I had a few strikes and one unintended mid-stream release.  Neither John nor Larry did well at that location either.  We returned to the Quarry Park, ate lunch, said good-bye to Todd, and hit the water again.  I began to feel overwhelmed with the 80ish degree heat and didn’t fish long.  Larry and John did fair.  John was catching them on a black wooly bugger and an olive wooly bugger with lots of flash tied in.  Larry caught a few on a black leach pattern.  I spent the rest of the day in camp…skunked for the day and frankly, a little under the weather.  I had a nice nap.  Next morning we were fishing before the sun was up.  I used wooly buggers and caught three, one was pretty nice.  John did well using wooly buggers and Larry had a slow morning.  Breakfast was worth the wait.  Then Larry and I went back out.  I believe that the next time I go to that river I’ll take my kayak and fish the hole just below the dam.  We all had fun.  Todd, I thought I had taken a picture of you at camp but darned if I can find it.  Sorry. 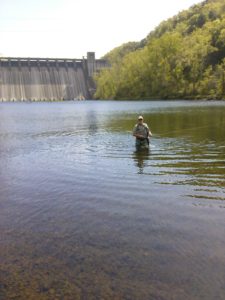 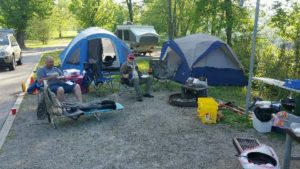 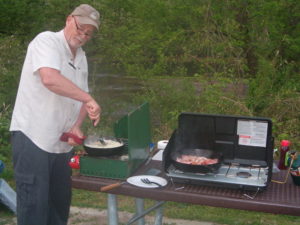 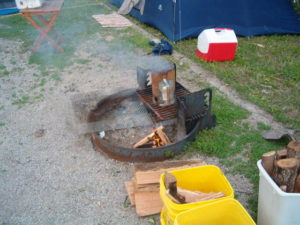 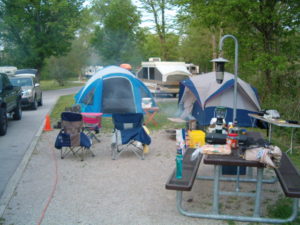 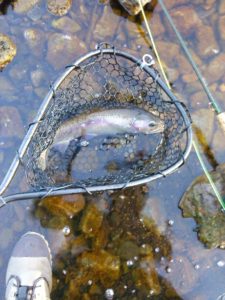