If you have heard Larry Wegmann telling about Crane Creek, you have heard of the high population of water moccasins in the area.  Larry’s not just telling stories.  He is speaking from herpetological research conducted at MSU.  Additionally, “Shane Bush, an MDC fisheries biologist, said … Crane Creek has an unusually high population of venomous cottonmouth snakes…”  Still, I’ve heard anglers swear they’ve never seen a snake at Crane Creek.  Neither have I, for that matter.  Maybe you have to know when and where to look.  Larry says these Crane Creek snakes live in holes in the flood plain and wait for critters to fall into the holes.  That behavior is similar to copperhead behavior.  Watch where you step.

During the latest Stream Team check of Crane Creek’s environmental health, Russ Doughty met some MSU students/researchers who were collecting cottonmouths.  He took this picture. 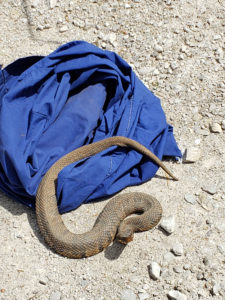 Cottonmouths aren’t the only snake around and non-venomous watersnakes are often mistaken for them.  The following is a post from the Ozark Anglers Forum.  Unfortunately, the author goes by a tag name.  “I’m one of the said researchers from missouri state that did cottonmouth research at crane. There is a good population there. There is also an even better population of northern water snakes. Watersnakes are a mimic of cottonmouths and most people will mistake the two. I collected cottonmouths from crane and every state they inhabit for genetic research. I wish cottonmouths chased people, would have made my job much easier! If you’ve ever gotten the impression a snake is charging/chasing you it was because you were between the snake and the spot it wanted to retreat to (to get away from you). Please leave the snakes alone.”