By Bob Randall on Saturday, December 30th, 2017 in Fishing Trip, Flies, No Comments 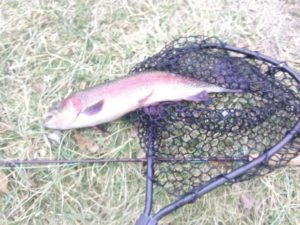 I am happy to report that the line did not freeze to the guides and my reel never froze up.  Larry Olson and I took advantage of our last opportunity to fish in 2017.  There were more people there than we expected but we didn’t have to crowd anybody.  We each caught a few.  Most of mine were on a grey scud and later on soft hackles and a parachute Adams dry fly size 14.  I thought the Adams was just going to be my indicator for the soft hackle below but I caught two on the dry.  Lucky seven was the last, largest, and most beautiful fish that I caught.  The red rainbow stripe was brilliant, although the picture didn’t do it justice.  He was 18 inches long and had a hook on the lower jaw.  I tried not to keep him out of the water too long.  First I measured him and put him back in the water (still in the net), then after letting him “breathe” while I readied my phone camera, I grounded him just long enough to get a picture.  Even after those considerations, I held him into the current for a while before releasing him.  It was a good way to end the year.