Catch and the Hatch

Home / Blog / Catch and the Hatch

Catch and the Hatch

By Bob Randall on Tuesday, August 9th, 2016 in Uncategorized, No Comments

Fish Food: I ordered the “Catch and the Hatch” course on line. It’s all about aquatic insects and other fish food. It’s informative and educational. It will also be useful after I get my priorities straight. When I get ready to fish, instead of thinking food (what are they eating), I think flies (which fly will I use). The last time I went fishing, I asked the first fly fisher I saw what fly he was using. That’s not a bad thing. I had never been to that river before. … It’s a good start but I should be beyond that at this point in my sport. Even though he had just caught a trout on an egg pattern, he said egg patterns hadn’t brought him much success this summer. I tied on a scud just like I would have at Lake Taneycomo. I must be stuck on stupid. Of course, I wasn’t at Lake Taneycomo and my gray scud turned out to be the wrong color and size. I tried several other flies, caught a tiny shiner barely able to get the fly in his mouth and then a par marked trout about 5 inches long. After tying on fly after fly, I remembered the insect seine I received with my course. With it, I was able to scoop up some fish food.

All of the scuds I found were clearly an olive color, not gray. They were approximately a size 18. I had wasted a good hour and a half asking other fishers what flies they were using and trying to imitate them. Well, none of those fishers seemed to be catching much either. I need to spend more time with my insect seine and concentrate on the fish food it will reveal.  My seine is the net type as it fits over my fish net.  Some other types are shown below: 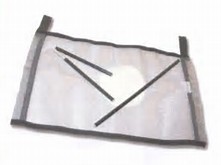 You don’t have to know the names of the bugs, but it will give you an idea of size, color, and shape of what’s in the water.  If it ain’t in the river, the fish aren’t eating it.